Mr. T’s signature line is “I pity the Fool!”  When asked about it on late night TV with Conan O’Brien, Mr. T said he got that line from the Bible! (That claim may need more investigation-  there are several times in the New Testament where Jesus is said to be moved with pity before he heals someone [Matthew 20:34, Mark 1:41].  Psalm 72:13 says that God has pity on the weak and needy.)

Others books have a lot to say about fools.  Proverbs mentions the word “fool” sixty four times, and not all fools are alike.  There are four Hebrew words for “fool” in the book of Proverbs: 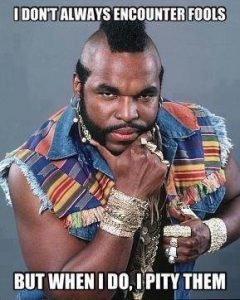 Ewil- Silly Fool- The one who thinks he has all the answers.  If you corrected this person, it probably would not do any good:

yet his folly will not depart from him”

Lis-Scorner, Scoffer-  This is the person who makes light of sin.  We are instructed to eject them:

Prov. 22:10 ESV Drive out a scoffer, and strife will go out, and quarreling and abuse will cease.

Nabal- wicked or vile person- No sensibility to God or to morals or other people- their mind is closed to reason. In 1 Samuel 25:3 Nabal is described as man who is wicked and behaves badly.  David sends his servants to Nabal with a request, and Nabal replies essentially, “Buzz off!”

The fool says in his heart, “There is no God.” They are corrupt, they do abominable deeds;

there is none who does good.

My intent in explaining these different kinds of fools is to give background to the book of Proverbs- but also to remind us- We all act as fools! We all laugh at sin on occasion; all of us have shades of Nabal’s arrogance in our hearts- and without the forgiveness of Jesus, without the daily direction of the Holy Spirit, we would be without hope!  “For by grace you have been saved, through faith, and this not of yourselves…”  (Eph. 2:8-9)

The fountain of wise living- is Jesus himself- who gives living water!  My main point today is that we must desire that Jesus Christ be honored above all, in order to speak truth.  All lying, slander, and gossip, is a result of selfish desires to survive or appear better than we are, and as a result it dishonors Jesus.

We are going to approach the topic of the Tongue in the form of four questions.

–When you deliberately say you did not do something, which you in fact did; that is a lie.

–You claim to have done something which you have not done.

–When you falsely report information, or shade the truth to fit your desire.

–When you exaggerate the truth with a goal to deceive.

About a week ago, I was on the golf course and was facing my third shot into the green from a sand bunker.  Since the golf course was inside a community, there were houses just behind the green.  I hit my shot well past the green, in between two houses, and onto the street on the other side.  I was embarrassed, I hadn’t yelled “Fore!”  Thankfully, I did not hear a bang or any crashing windows.  Yet I did not go look for the ball.  In effect I lied; I did not admit the truth.  Why? Because I was afraid of the negative impact on myself.  I was more concerned about my reputation than the well being of the family and their house on the other side of the street (which likely had a golf ball bouncing into the front yard and onto the porch!)

[16] There are six things that the LORD hates,
seven that are an abomination to him:
[17] haughty eyes, a lying tongue,
and hands that shed innocent blood,
[18] a heart that devises wicked plans,
feet that make haste to run to evil,
[19] a false witness who breathes out lies,
and one who sows discord among brothers.

Notice the double references to lying- a lying tongue, a false witness.  A person who sows discord is someone who uses their words to stir up trouble.

In the book Honesty, Morality, & Conscience, author Jerry White, explains why lying is appealing: “But lying happens so easily, especially when speaking the truth counters what we want.  We find it easy to shade the truth–changing it just enough to suit our desires.” He then gives the example of selling his used car to another person and going to the county clerk’s office to sign over the title.  The buyer, who said he was a Christian, whispered to him, “I know you sold the car to me for this amount, but put down that you sold it for less.”  After Jerry White told buyer he could not do that, that it would be lying, the buyer replied, “I ‘m a Christian too, I just hate to pay taxes when I don’t have to.”   This man was willing to lie, and to get someone else to lie along with him, all because he didn’t want to pay a few extra dollars of sales tax.

Slander & Gossip have a corrupting appeal because we have inside information, we feel more powerful, we feel we have the upper hand!  Slander is lying with malicious intent to defame or damage another person’s reputation.

Prov. 30:10 ESV “Do not slander a servant to his master, lest he curse you, and you be held guilty.”

We usually slander because we are trying to gain an advantage over someone, or someone is in our way.  Gossip consists of spreading rumors, misinformation, or limited information in the hopes that others will speculate, or take action against someone we see as an enemy.

[13] Whoever goes about slandering reveals secrets,
but he who is trustworthy in spirit keeps a thing covered.

[19] Whoever goes about slandering reveals secrets;
therefore do not associate with a simple babbler.

Realize- we are implicated when we give a willing ear to gossip or slander, because gossip goes deep into the heart…

[8] The words of a whisperer are like delicious morsels;
they go down into the inner parts of the body.

[23] The north wind brings forth rain,
and a backbiting tongue, angry looks.

[28] A lying tongue hates its victims,
and a flattering mouth works ruin.

[9] Whoever covers an offense seeks love,
but he who repeats a matter separates close friends.

Many of us have been hurt by friends who have betrayed out trust.  Many relationships have ended because one person shared something meant to be kept in confidence.  In high school I remember betraying my friend’s trust by revealing something to our teacher.  My friend was not in trouble for doing something wrong, I simply chose to share a piece of information he had shared with me, without getting his permission.

Lying breaks trust and destroys relationships!  Again, from author Jerry White, “Lies destroy trust, and once trust is gone, a relationship is difficult to restore.  Yet the habit of lying can develop so subtly that it goes unnoticed.  We begin by lying about small things that ‘don;t matter.’  Then we develop a pattern.  Soon credibility and friendships are lost.”.

Consider the example of M. Larry Lawrence, who lived a life of lies:

Mr. Lawrence wanted glory from man more than giving honor to God. He lied to both his wives, his family, and his country.

In order to live truthfully, we must desire the honor of Jesus above everything else!  We must desire to make Jesus famous–for his name to be honored, rather than recognition for ourselves, which often comes by exaggerating the truth.

[8] Remove far from me falsehood and lying;
give me neither poverty nor riches;
feed me with the food that is needful for me,
[9] lest I be full and deny you
and say, “Who is the LORD?”
or lest I be poor and steal
and profane the name of my God.

I don’t think that it is just coincidence that lying and the danger of riches are mentioned in consecutive verses.  Contentment is the antidote to greed, and when greed is absent, we will tell the truth because there will be less temptation to lie for the sake of riches.

In Proverbs, one way to get a fool to avoid evil is to use physical punishment.  Interestingly, the word for “blows” in Proverbs 20:30 is the same word for “wounds” in Isaiah 53:5,

[5] But he was pierced for our transgressions;
he was crushed for our iniquities;
upon him was the chastisement that brought us peace,
and with his wounds we are healed.

“with his wounds we are healed”!  Jesus was wounded on our behalf; we are spared blows in order to be cleansed from evil!  He cleanses us through his own wounds!  Thank God that we do not have to face the rod of physical punishment in order to avoid evil and gain eternal life.  Jesus gives us new hearts so that we desire to honor him more than anything or anyone else.  Let us pray.