Ephesians 6:11  “Put on the whole armor of God, that you may be able to stand against the schemes of the devil.“

If the devil were in our churches, homes, society, or culture, he would be pretty obvious, wouldn’t he? Would he be this obvious? 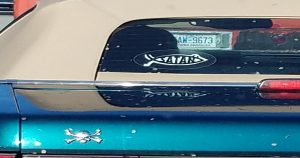 A “Satan” bumper sticker I saw recently on Rt. 64 outside Cary, NC

Satan is the father of lies and a murderer from the beginning (John 8:44).  Yet the “Satan” bumper sticker above implies a Cheshire cat grin and a chuckle, poking fun at Christians who have the Ichthys logo which sometimes has the word Jesus in the middle of it: 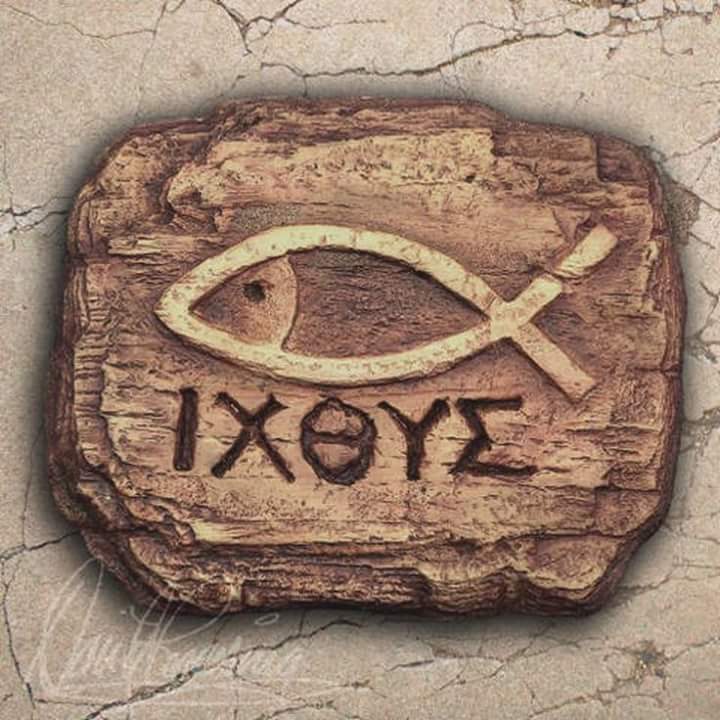 One of the ways in which our hearts grow calloused and hardened towards evil is by continually poking fun at it.  When we make light of something, its danger lessens, or at least its perceived danger to ourselves.

Sort of like the person who whips his keys out of his pocket on an airplane and jokingly says to the stewardess: “Good thing I don’t any weapons in my pocket, just my keys.”  It might provide an immediate chuckle as a defensive reaction, because it subtly distracts our minds against the all to prevalent reality of airline hijackings and bombings; a sad reality of normal life in a global world.

My guess is that the car and driver I saw recently with the bumper sticker above was making fun of Christians and their beliefs as fictitious, as if we are the kind of people who believe in fairies and unicorns, as well as the Easter Bunny, especially.  It may be that the driver or owner of the car is a practicing Satanist, which would be even more sobering and leads to this question:

In reality, how else can the presence of evil, sin, corruption, and the violence of humankind be explained, other than Satan and the depravity of the human heart?

Whether it is the daily reality of racial strife and violence, thousands of cases of sexual assault and harassment, terror groups that kidnap, exploit, and murder defenseless victims: why is our world just as evil now as it was several thousand years ago?  Despite hundreds of years of “enlightened” education, available technology that has the potential to save millions of lives around the world, and decades of elections promising social policy which will help the “average worker”, reduce poverty, bring a decline in violence, and curtail corruption; these ideals have not improved on a large scale.  Satan is the master of deceiving the human heart and mind.

How else can you explain the executive from Cambridge Analytica- blithely talking in a polite, calm voice–over relaxing dinner music, no less– about how simple and easy it is to use land deals, sex workers, and other bribes to influence politicians in order to get election results? He comes across as if he is simply ordering an appetizer!

“I mean, it sounds like a dreadful thing to say, but these are things that don’t necessarily need to be true, as long as they are believed.”

My point is not which politicians or executives are worse than any other, because the human heart is so easily deceived, and deception of the heart is cumulative: once you go down a path to lies, deceit, pride, and lust for power, it becomes easier and easier to disregard morals the next time.  Like my friend Ross says, “at some point you start to believe your own press.”  What then is the result?  Satan and morals- especially Judeo-Christian morals- along with any potential consequence of breaking those morals, become like fiction to the mind.  They seem just as antiquated as a covered wagon and the telegraph.

These two snippets reveal culturally acceptable ways that people ignore the reality of Satan and spiritual warfare, at their own peril.

But the person who sees their own need for forgiveness, who has realized self-deception in their own actions; this person responds by saying, “Satan is real, and I had better be careful to avoid his tricks.” Romans 7:21

It is the person who knows they do not deserve it, but they have been given superabundant grace in Christ, this person lives in freedom by the creed, “I will not be bought for money, because Jesus Christ bought me and rescued me at the price of his own life.” 1 Peter 1:19

One of my life verses is Proverbs 4:23.  “Above all else, guard your heart, for it is the wellspring of life.”  I know that I must constantly check my own heart’s motives against scripture and against the character of Jesus Christ.  Only He made it made it possible by His Spirit for me to have new heart and new, everlasting life.  God help us all, we sure need it.

I’m really enjoying the music of Chris Renzema. Here is the music video to his song “God is Love”. One of the lines: “What I earned, is not what I got.” View Post

We mistakenly think that what is for our ultimate good is the same as what we desire in the meantime.